Home »  Republicans Are Following Trump Down A Dark Path 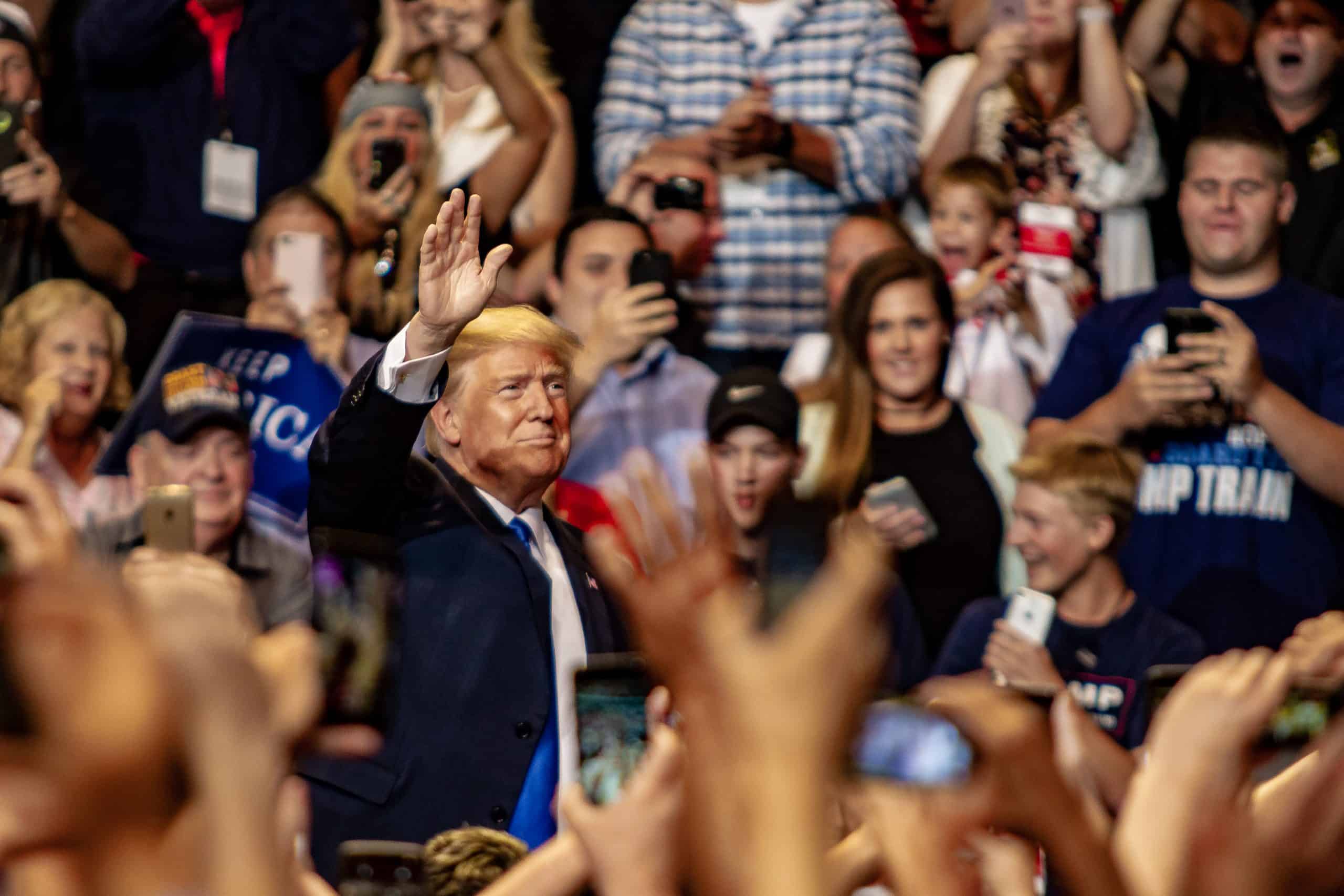 Republicans Are Following Trump Down A Dark Path

Donald Trump famously told his followers during the 2016 election that there would be “so much winning” that they would get tired of winning. Five years later and that promise has aged like milk.

Regardless of what he says, Donald Trump lost the 2020 presidential election, fair and square. The Republican Party also lost control of the Senate in that election (more specifically, the runoff races in Georgia that took place in early January 2021.) Republicans lost control of the House in 2018. And Republicans lost ground in every single special election that took place during Trump’s four years in office. And we can’t forget about the fact that Trump lost the popular vote in 2016 by nearly 3 million votes. In every possible way, Trump was one of the biggest political losers in a generation.

So the Republican Party was given a choice when Trump left office: Either follow Trump and continue to watch their Party slowly die, or let him drift off into obscurity as they attempt to rebuild. They chose the first option.

On the morning of May 12th, 2021, the Republicans in the House of Representatives voted to strip Representative Liz Cheney (R-WY) of her leadership position as the third-ranking Republican in Congress. Her crime was that she wouldn’t spread the “Big Lie” that the 2020 election was rigged and she voted to impeach Donald Trump during his second impeachment in the House. It was during this vote that the Republicans made it clear that they were going to follow Trump down the dark and twisted path that he put them on several years ago, and at that point there was no turning back.

How Did They Get Here?

There is no shortage of speculation about where the Party heads now, but before we can even begin to entertain those possibilities, we have to remember how they got here. You can find volumes of work explaining the slow descent of the GOP to where they are today. Articles abound detailing the how the Iraq War pushed Republicans further to the right or how the rise of the Tea Party Movement allowed some of the more extreme members of the Party to rise to prominence, ultimately paving the way for Trump. And while all of those reasons contributed to Trump’s rise (along with many others) they leave haven’t touched on the biggest problem the Republican Party faced before Trump came along: They needed a hero.

In the decades prior to Trump’s rise, Republicans all clamored to be like Ronald Reagan. He was their mythical savior that helped to put the Party on track after the embarrassing days of Richard Nixon and Gerald Ford. Reagan came in with a bold new economic idea (that ultimately proved to be a farce,) he destroyed unions, attacked social programs, and brought the U.S. out of the Cold War. He was the hero that Republicans needed and the didn’t even know it.

The years after Reagan were spent trying to emulate him. Candidates would routinely invoke Reagan’s name on the campaign trail, even into the 2010’s. But as the real cost of Reagan’s policies came into focus – increasing inequality, multiple recessions brought on by disastrous trickle-down economic policies, and regulatory capture that has given corporations the greenlight to gamble with our lives – Reagan’s name no longer had the same impact on moderate voters that it once held.

The Republican Party needed a new hero. They couldn’t find one in their current ranks. Politicians like Ted Cruz and Marco Rubio in 2016 offered nothing more than the status quo who wouldn’t actually shake things up and forge a new path the way that Reagan had. And as the Party was so desperate for a savior that they welcomed Donald Trump with open arms.

Except they actually didn’t.

We can’t forget the fact that most Republican politicians at the onset of the 2016 Republican primaries loathed Trump. Republican Senator Lindsey Graham famously tweeted “If we nominate Trump we will get destroyed, and we will deserve it.” Other prominent Republicans expressed disgust at Trump’s brash and fallacious attacks on immigrants and the content of the Access Hollywood tape. But for some reason, none of that mattered to Republican voters, and they propelled him into the White House.

He represented something that the Party hadn’t seen since Reagan. He was an outsider, someone that wasn’t corrupted by the “swamp” of Washington, D.C. He wasn’t afraid to say what he means, even if it was the most racist or sexist thing they ever heard. Even though most didn’t like hearing those statements, they ended up endearing him to them because they thought that he was at least being honest, unlike the rest of the 2016 candidates. He was a larger-than-life figure that drew tens of thousands of people to his rallies, partly because people wanted to see the spectacle. They wanted to see who would be the next target of his rage, what clever insults he would hurl at them, and how he would put those nasty liberals in their place. But the important thing was that they had found their hero, and that was all that mattered.

Almost immediately after Trump took office, things began to fall apart for him. The Mueller investigation and allegations of election interference called the legitimacy of his election into question. He packed the courts with unqualified hacks that the public was not fond of. He got the United States into a trade war that he didn’t know how to manage. He bungled responses to major hurricanes and other natural disasters throughout the U.S. He packed his cabinet with individuals who had no business being in power. He attacked groups like the LGBTQ community and immigrants with a hatred that began to turn off some of his supporters. He was accused of sexual harassment or assault by at least two dozen women. He continued to refuse to release his tax returns in spite of numerous promises to do so. The Ukraine scandal that led to his first impeachment. And this was all before the Coronavirus Pandemic exposed how incompetent he truly was. The “hero” façade fell apart quickly, and sensible Republicans wanted nothing to do with him.

The main problem with this disturbing tale is that there weren’t enough sensible Republicans to make a difference, and the May 12th ousting of Liz Cheney proved it.

This all brings us back to the present. The Republican Party chose Trump, even though he cost them so dearly over the past four years. Hero worship can’t explain all of that, so what good reason could the GOP have for sticking with Trump even though the public at large – and even now the majority of Republicans – are unhappy with this decision? That answer is actually easy: Fear.

When Trump left Washington, D.C., he was upset about his second impeachment and the small handful of Republicans who voted to convict. He was so upset that in the early days of his post-presidential life he was meeting with advisers and family about the possibility of starting a new political party to challenge Republicans that he believed were not loyal to him. A move like this would have created a fracture within the Republican base, with loyal Trumpists flocking to his new party while the Republicans were left with the rest of the base. Neither would have had the numbers to win tight districts or states, thereby giving Democrats a major advantage in all future elections. The thought of this happening sent shivers down the spine of Republicans in D.C., so they began holding talks with Donald to find out how to avoid the fight. But the only thing that would appease Trump would be for those who went against him to pay, and we all know what that led to.

This helps to explain why so many Republicans were willing to continue spreading election lies even months after the November election took place. It wasn’t because they believed those lies; it was because they had to keep Trump happy. Liz Cheney was just the first person they could sacrifice to Trump in order to appease him.

That sacrifice came with a cost. Polls and focus groups that have been conducted following Cheney’s expulsion from leadership show that moderate Republicans and swing voters are not happy with where their Party is headed. And more than 100 former Republican officials from both the federal and state levels signed onto a letter demanding that the Party change course away from Trump or THEY would leave to start their own political party. So by trying to save their base from fracturing the Republicans ended up putting the rift on steroids, and they are once again staring down a situation where they can’t hope to keep everyone in their big tent.

Don’t waste any time shedding tears for the Republican Party. They did this to themselves, and they are the ones to blame for their current predicament. They were given every possible chance to reverse course and move on from Trump, but they decided that the future of the Party was forever tied to his desires. They nominated Trump, and though it may have taken a few years, they got destroyed, and they deserve it.