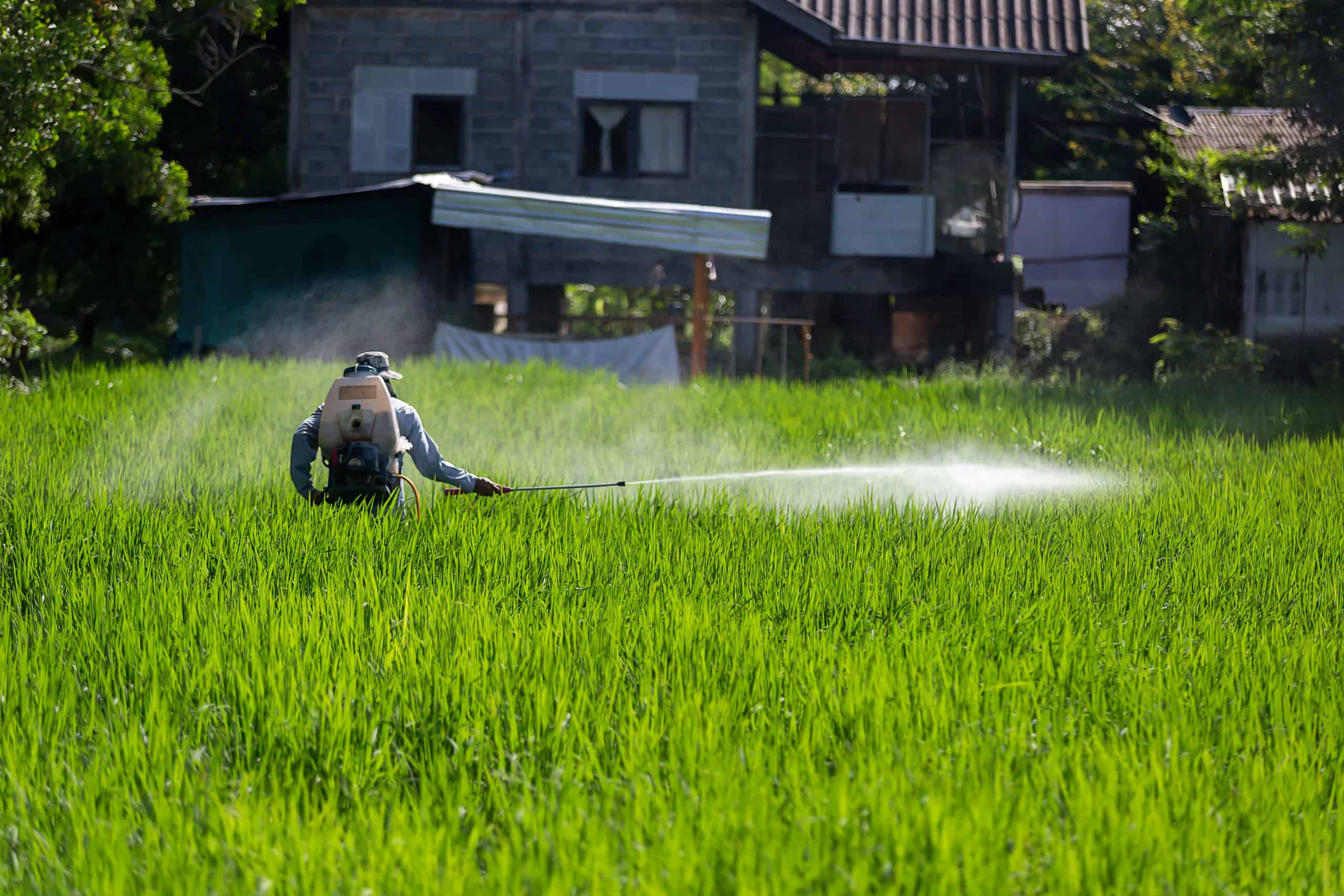 Pesticide Linked To Brain Damage In Children May Finally Be Banned

A federal appeals court has ruled that unless the Environmental Protection Agency (EPA) can prove that the pesticide chlorpyrifos is safe, it must be banned. The chemical, which has been widely used on agricultural crops for more than 50 years, has been linked to neurological development issues in children, with mounting evidence implicating its role in autism, ADHD, motor and loss of IQ. In the 2-to-1 ruling on April 29, judges on the U.S. Court of Appeals for the 9th Circuit gave the federal government 60 days to either rescind all uses of chlorpyrifos related to food or to show evidence that in certain cases it is safe for public health.

In the majority opinion in the case League of United Latin American Citizens v. Regan, which was filed in 2007, Judge Jed Rakoff, a Clinton appointee, wrote, “[T]he EPA has spent more than a decade assembling a record of chlorpyrifos’s ill effects and has repeatedly determined, based on that record, that it cannot conclude, to the statutorily required standard of reasonable certainty, that the present tolerances are causing no harm,” adding that “EPA’s egregious delay exposed a generation of American children to unsafe levels of chlorpyrifos.” Rakoff was joined by Judge Jacqueline Nguyen, an Obama appointee.

​​​​​“Yet, rather than ban the pesticide or reduce the tolerances to levels that the EPA can find are reasonably certain to cause no harm, the EPA has sought to evade, through one delaying tactic after another, its plain statutory duties,” Rakoff wrote in the opinion, in which he stopped short of requiring the agency to ban the chemical, but left little room to keep it on the market. “The EPA must act based upon the evidence and must immediately revoke or modify chlorpyrifos tolerances.” Pregnant women and their fetuses, young children and farmworkers are particularly at risk from chlorpyrifos, which was first registered for use in 1965.

“There are numerous studies showing that exposure to chlorpyrifos in the womb harms children’s brain development,” said Dr. Warren Seigel, chair of New York State American Academy of Pediatrics. “The science is clear, and this pesticide should have been banned years ago.”

The ruling “virtually guarantees” that the EPA will revoke food-related applications of chlorpyrifos, according to dissenting Judge Jay Bybee, a George W. Bush appointee, who argued that his colleagues overreached and “misread” the agency’s obligations to review specific uses of the chemical that it had previously determined were safe. He criticized the majority, saying that it “substituted its own judgment for EPA’s decision.”

The EPA is reviewing the ruling, saying in a statement that the agency is “committed to helping support and protect farmworkers and their families while ensuring pesticides are used safely among the nation’s agriculture. … EPA will continue to use sound science in the decision-making process under the Federal Insecticide, Fungicide and Rodenticide Act” (FIFRA).

The ruling comes nearly two years after the Trump administration rejected a proposed Obama-era ban of the controversial pesticide, keeping it on the market despite aggressive calls against its continued use by public health and environmental groups. The Trump EPA decision, made in July of 2019, was a major gift to Dow Chemical, the maker of the pesticide, in what appeared as an act of quid pro quo. On December 6, 2016, less than a month after Trump’s election, the agrochemical giant donated $1 million to his inaugural committee. Then, on January 17, 2017, just three days before Trump was sworn into the Oval Office, Dow filed a petition with the EPA to reject the Obama-era proposal to ban the pesticide. On March 29, 2017, then-EPA administrator Scott Pruitt announced his decision to cancel the proposed ban.

“This is what we now know is the modus operandi of Trump and his EPA: corruption couched as policy,” said Ken Cook, president of the nonprofit Environmental Working Group, following Pruitt’s decision. “Trump and his political appointees at the agency show nearly every day that they are not there to protect Americans’ health but to cater to the whims of polluters. If you’re looking for evidence of corrupt collusion with sinister interests, here it is in plain view.”

What a difference a new administration makes. On his first day in office, President Joe Biden signed an executive order directing the EPA to review the Trump administration’s decision to deny the 2007 petition to ban food-related chlorpyrifos. It is unlikely that the Biden EPA will fight the appellate court ruling.

Environmental and farmworker groups applauded the court’s decision. “Today, we celebrate this huge victory alongside the men and women who harvest our food, who have waited too long for a ban on this pesticide,” said Teresa Romero, president of United Farm Workers, in a statement. “We are relieved that farmworkers and their families will no longer have to worry about the myriad of ways this pesticide could impact their lives.”

The ruling could bring more attention to the public health and environmental risks of other harmful pesticides, such as neonicotinoids, which are deadly to bees and other pollinators that are key to crop pollination. Friends of the Earth, a nonprofit, has launched a public petition urging Americans to tell their congressional representatives to co-sponsor the Protect America’s Children from Toxic Pesticides Act, introduced in 2020 by Sen. Tom Udall (D-N.M.) and Rep. Joe Neguse (D-Colo.).

The bill seeks to strengthen the EPA’s authority under FIFRA to regulate the distribution, sale and use of pesticides, and ban some of the most toxic pesticides used across the nation, including all neonicotinoids, organophosphates (a class of phosphorus-based insecticides that includes chlorpyrifos) and paraquat, an herbicide that has been linked to renal, hepatic and respiratory damage, and which is already banned in 32 countries.

Are pesticides even necessary? Some experts believe that, while there are obvious trade-offs to spraying toxic chemicals on crops, using pesticides properly can actually protect some parts of the environment. Pesticides “allow us to maximize production on the smallest footprint of land. This is called ‘land sparing,’” said Tim Durham, a professor of agronomy and agricultural sciences at Ferrum College in Ferrum, Virginia. “If we decided to [forgo] pesticides, we’d need to appropriate a much larger chunk of land to do the same job and land that happens to be the most biodiverse and at-risk.” Durham, who is also part of his family’s vegetable farm on Long Island, New York, adds, “Pesticides provide some measure of predictability in the otherwise unpredictable world of farming, helping to stabilize commodity prices and keeping prices low in the grocery aisle.”

However, some advocates of organic farming, which is committed to zero pesticides, or limited pesticide use under National Organic Program standards, say that conventional industrial farming that is heavily reliant on chemical use isn’t necessary to feed the world’s population.

“The myth that organic food can’t feed the world isn’t just wrong, it’s downright counterproductive,” according to the Rodale Institute, a nonprofit based in Kutztown, Pennsylvania, that supports organic agriculture research. “Organic can compete with conventional yields and outperform conventional in adverse weather. Small farmers using organic methods have huge potential to expand global food production. And only organic methods actively regenerate resources and protect the environment from pollution and toxic waste. For a healthy future, we can’t afford anything less.”