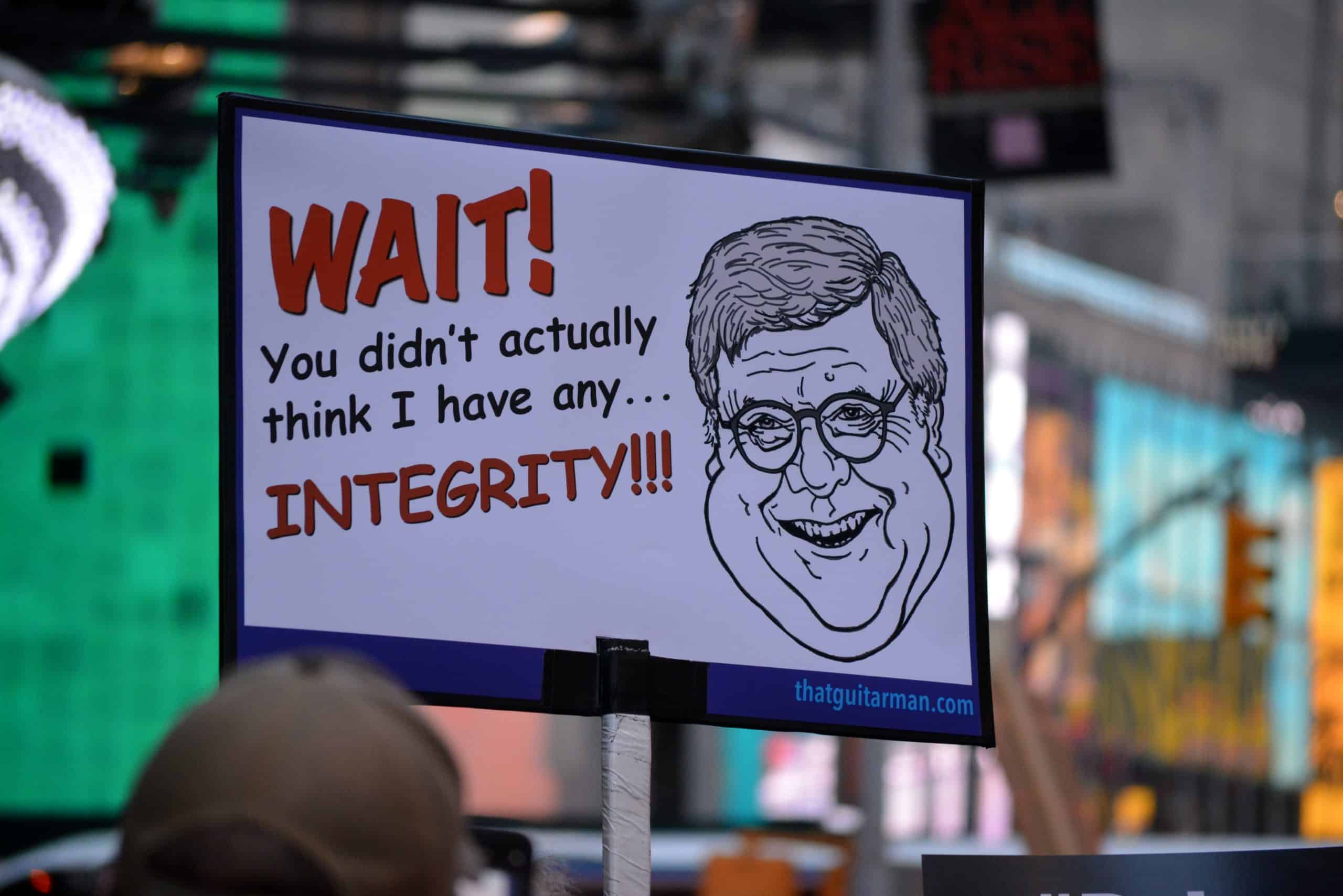 At a Congressional hearing in late June, the mainstream media paid scant attention to the damning testimony provided to the House Judiciary Committee by John W. Elias, a career attorney at the Department of Justice (DOJ). Elias revealed astonishing details on the corrupt manner in which Attorney General William Barr and the "political leadership" of the DOJ's Antitrust Division abused our antitrust laws; corruptly ordering career staff to open unwarranted but burdensome, politically-motivated antitrust investigations.

It's not that Elias' testimony was unimportant. His words were simply drowned out by the testimony provided by other witnesses about other Barr/DOJ misconduct, and by a separate, but related event. The combined effect of the other testimony provided to the Judiciary panel and the separate news event was nothing short of jaw-dropping.

Still, Elias' previously unthinkable allegations were, in fact, no less so...

So much prosecutorial abuse, so little time...

Even as the hearing was underway, a three-judge D.C. Circuit Court of Appeal panel handed down a disastrous 2 - 1 decision relating to the DOJ's motion to dismiss the long-running prosecution of former National Security Advisor (and Trump crony) Michael Flynn. That motion was filed by Barr's DOJ despite Flynn's sworn, in-court admissions of guilt and the acceptance of his formal guilty pleas by two different U.S District Court judges.

Earlier, in an erudite amicus curiae brief, a retired federal judge described the DOJ's abrupt about face in the Flynn case and the DOJ's motion to dismiss as "preposterous", "corrupt" and "politically motivated". The DOJ's reversals in the Stone and Flynn cases so troubled U.C. Berkeley Law Professor Orrin Kerr that he expressed concern that Trump, with Barr as a willing accomplice, had engaged in "Banana Republic style interference" in DOJ prosecutions. That concern was shared by more than 2,000 former federal prosecutors who signed an open letter encouraging U.S. District Court Judge Emmett Sullivan to carefully scrutinize the reasons why the DOJ sought a dismissal.

The appeals court majority opinion was authored by Judge Neomi Rao, a Trump appointee. Even though the Federal Rules of Court restrict a prosecutor's ability to dismiss a pending case absent "leave of court", the appellate panel majority refused to permit Sullivan to proceed with a scheduled July hearing on the motion to dismiss in the lower court, or to even question the DOJ's reasons for its stunning reversal on the Flynn case. The appeals court ordered Judge Sullivan to immediately grant the dismissal motion. The dissenting jurist, Robert L. Wilkins, described the panel majority's ruling as an unprecedented and "grievous" overstepping of the appellate court's authority. The majority ruling, as this author previously observed, was "tantamount to an abandonment of the Judiciary's constitutional function to act as a check against Executive Branch abuse." (Under court rules, the full D.C. Court of Appeal has the authority to rehear the matter en banc, and is now believed likely to do so.)

Those two earth-shaking events --- Zelinsky's testimony and the Flynn appellate decision --- were then topped off by the powerful assertion made by Republican former Deputy Attorney General Donald Ayer, in his opening statement to the House Judiciary Committee, that "Attorney General Barr is a major threat to our legal system and to the public trust in it."

Small wonder that most of the air had been sucked out of mainstream media newsrooms. That said, the somewhat overshadowed Elias revelations about the DOJ's antitrust abuse warrant meticulous coverage. His disturbing allegations are important, if only because they serve as a bookend for the prosecutorial abuse revealed by the Flynn and Stone cases.

The Flynn and Stone cases involve a "corrupt", "politicized", "gross abuse of prosecutorial power" in order to benefit the President's allies. The cases described by Elias entail instances in which the Barr DOJ abused our nation's antitrust laws to frivolously and maliciously (a) target Trump's perceived "enemy" (the State of California) and to (b) harass an industry, whose product (marijuana), offends Barr's extreme personal religious beliefs.

In both instances, per Elias, the DOJ's Antitrust Division strayed far away from the purpose of our antitrust laws, which, according to the DOJ's 2015 Mission Statement, are to promote "free and fair competition in the marketplace" by prohibiting "a variety of practices that restrain trade, such as price-fixing conspiracies, corporate mergers likely to reduce the competitive vigor of particular markets, and predatory acts designed to achieve or maintain monopoly power".

When clean air offends the President

Elias alleged in his sworn testimony that, on August 20, 2019, shortly after California announced that four major automakers had agreed to comply with its air quality emissions standards --- standards that were more stringent than the lax standards contemplated by the Trump administration's less than environmentally conscious Environmental Protection Agency (EPA) --- the "New York Times reported that President Trump was 'enraged' by the deal and wanted to retaliate."

The career prosecutor laid out how, under established DOJ precedents and doctrine, the agreement to comply with California's emission standards didn't even come close to an antitrust violation. He also added, in a footnote, that if there had been a serious question of antitrust violations, since they entailed a commodity (automobiles), that "would normally be handled by the Federal Trade Commission rather than the [DOJ's] Antitrust Division". "The FTC", Elias explained, "is an independent agency, and its Commissioners cannot be removed by the President over mere political differences."

On August 22, one day after Trump took to Twitter to express displeasure with the automakers' willingness to comply with CA emissions standards, and without any input from career staff, "Antitrust Division political leadership instructed staff to initiate an investigation that day," Elias charged.

Despite criticism of the probe from many of Elias' colleagues and sworn affirmations from the four automakers that "each company had independently entered into an agreement with California" --- thereby undercutting any claim that the investigation could be justified on the basis of a "competitor-to-competitor" agreement --- the Trump-appointed head of the DOJ's Antitrust Division, Assistant Attorney General Makan Delrahim, "instructed staff to examine an announcement by California that it would purchase state vehicles only from automakers that comply with stricter fuel efficiency standards." (Before being appointed to head the Antitrust Division, Delrahim had served as Trump's Assistant White House Counsel.)

Elias laid out why this didn't come close to a basis for continuing the investigation:

When operating as a market participant, states have a wide latitude to determine their own purchases. Moreover, California’s annual purchase of fewer than 2,700 vehicles in a state of nearly 40 million did not confer it with the market power that could lead to antitrust liability.

Nonetheless, the Division refrained from even notifying the automakers that it had closed its ill-considered investigation until February of 2020.

Unscientific hysteria gave rise to our costly, failed "war on drugs" --- a war that is the shameful source of mass incarceration. The U.S. (aka "Land of the Free") accounts for less than 5% of the world's population, but 25% of its prisoners.

Marijuana is the least dangerous recreational drug --- far less so than many "legal" substances, such as alcohol and tobacco. Multiple studies have also established marijuana's medicinal benefits. Those benefits include a significant reduction in opioid dependence.

At the state level, huge strides have made to eliminate the harsh impact of marijuana prohibition. Forty-four states have legalized its use for medicinal purposes. Eleven of those 44 have legalized recreational use as well.

Marijuana is still classified as illegal on the "flawed, outdated and unscientific" federal drug schedule. However, as Elias observed, an "appropriations rider restricts the [DOJ] from prosecuting medical marijuana usage in states that have legalized it".

Despite the science and the appropriations rider forbidding DOJ medical marijuana prosecutions, Elias reports that, as part of his personal bias against marijuana, Barr misused the DOJ's Antitrust Division to harass marijuana companies, subjecting proposed mergers to onerous scrutiny even though career staff found no reasonable basis for doing so.

The first of those cases involved the merger of two marijuana dispensary companies, MedMen and PharmaCann. As a result of its initial investigation of the reported proposed merger, "career staff examined the transaction," Elias detailed. "They determined that the cannabis industry appeared to be fragmented with many market participants in the states that had legalized the product." There being no competitive concerns, there was no reason to next institute a rarely used "Second Request" investigation.

"Second Request investigations are infrequent", Elias explained, "because they require the companies to respond to burdensome subpoenas...and produce hundreds of thousands or millions of documents."

As a result of a "negotiated subpoena compliance", Elias testified, the Division obtained "1.3 million documents from the files of 40 companies. The investigation confirmed that the markets at issue were 'unconcentrated' and closed in September 2019 without any enforcement action." Elias went on to explain that the "merger collapsed, nonetheless, with MedMen citing unexpected delays in obtaining regulatory approval."

Under Barr's "leadership", in FY2019, the DOJ's Antitrust Division went on to conduct nine additional marijuana merger investigations, eight of which entailed burdensome Second Requests. "In several instances, staff sought to make the investigation less burdensome...by narrowing the subpoenas," alleged Elias. "Political leadership refused such requests". That same "political leadership", however, allowed cases to be closed even though they had reviewed only a few the millions of documents the beleaguered cannabis companies were forced to turnover. "In one case," Elias alleged, "the Division records show that the closing process began before the documents had been uploaded and made available for viewing by Division staff."

In Elias' estimation, the marijuana merger probes were a colossal waste of Antitrust Division resources: At one point, cannabis investigations accounted for five of the eight active merger investigations in the office that is responsible for the transportation, energy, and agricultural sectors of the American economy. The investigations were so numerous that staff from other offices were pulled in to assist, including from the telecommunications, technology, and media offices.

During a September 17, 2019 all-staff meeting, any and all doubts as to the source of this colossal waste of Antitrust Division resources were eliminated, according to Elias' sworn opening statement, when Delrahim "acknowledged that the investigations were motivated by the fact that the cannabis industry is unpopular 'on the fifth floor', a reference to Attorney General Barr's offices in the DOJ's headquarters building."