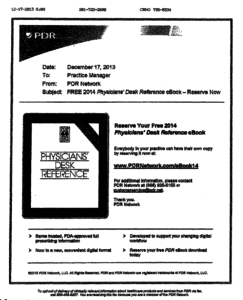 Poised to settle a jurisdictional issue that has bedeviled it for years, the Supreme Court took up a case Tuesday involving a publisher that was sued for faxing an advertisement to a West Virginia chiropractic office.

As the petitioner PDR Network LLC told the court in its bid for certiorari, a divided panel of the Fourth Circuit ruled in the the decision below that “the District Court lacked the jurisdiction to independently interpret the statutory term ‘advertisement’ and apply it to the single fax in question.”

“That decision contravenes basic judicial providence to say what the law is, directly ...