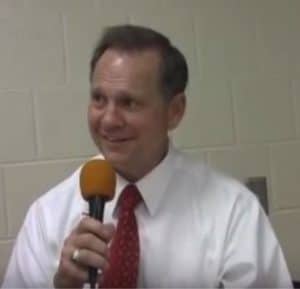 The Post says the Moore campaign has denied the allegations. AL.com has Moore's full statement on the accusations. Moore was twice removed from his position as chief justice of the Alabama Supreme Court. The first removal happened in 2003 after he defied an order from the US Supreme Court to remove a granite sculpture of the Ten Commandments from the Alabama Supreme Court building. The second happened in 2012, when Moore was removed from office for again refusing to follow a judicial order when he instructed probate judges in Alabama not to issue marriage licenses to gay couples.