Gabriella Gonzalez and her mother have filed a $1.1 million lawsuit against the dog’s owner, Alaska Airlines and the Port of Portland.

Gabriella asked if she could pet a dog, a pit bull. It was allegedly an emotional support animal. As soon as she reached out her hand, it bit her in the face.

The 12-year-old stood her ground when confronted by a small town police chief who told her it was illegal to film him and post it on the Internet. Patagonia, Ariz., offered full apology.

Read the source article at rappler.com

A Florida state court jury hit the nation’s two largest tobacco companies with a $37 million total damage award for the role it found the companies played in a woman’s death after losing a lung to cancer.

Richard Mahfuz claims the companies’ part in a sweeping scheme to hide the dangers of smoking through much of the 20th century hooked his wife to cigarettes and ultimately killed her.

A renowned Boston attorney is suing the Buffalo Diocese for $300 million on behalf of a Niagara County woman who said she was abused by a Franciscan priest in the 1970s and 1980s.

Read the source article at ktvq.com 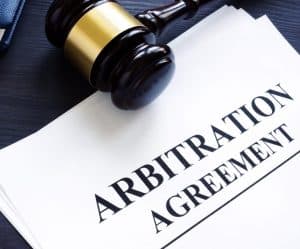 Victim advocates from around the country joined Congressional leaders at a press conference to bring attention to the secretive, rigged system of forced arbitration that is hidden in the fine print of many everyday consumer contracts, employee handbooks, and even “click-through agreements.” Together, they unveiled the Forced Arbitration Injustice Repeal (FAIR) Act, introduced by Sen. Richard Blumenthal (D-CT) and Rep. Hank Johnson (D-GA), that would restore the rights of consumers, workers, and patients to seek justice and accountability from the corporations that physically or financially hurt them.

New polling data was released in conjunction with today’s press conference. A recent nationwide poll by Hart Research found broad bipartisan support of 84% of voters for a bill to end forced arbitration (87% of Republicans and 83% of Democrats). More poll results can be found here.

“Forced arbitration clauses buried in the fine print hurt everyone,” said Linda Lipsen, CEO of the American Association for Justice. “If corporations know they won’t ever be held publicly responsible, our civil rights, as well as our public health and safety are at risk, from the cars we drive, to the jobs we take, and the food we eat. That’s what makes this legislation so important, and I commend the advocates and Members of Congress who stood up today to demand action.”

“We at Public Justice routinely hear from people who are unable to seek justice after a corporation broke the law and harmed them. Forced arbitration clauses bar them from having their claims heard in court,” said Paul Bland, executive director of Public Justice. “The energy in favor of the FAIR Act is like nothing I’ve seen before in this fight for corporate accountability and against perpetrators of gender and race discrimination. Its passage would make American life much safer, healthier, and fairer.”

“Real justice means that the people’s courts – not corporate courts like those in forced arbitration proceedings – decide who gets access to justice. Forced arbitration clauses literally pick consumers’ pockets by putting big business’s favored arbitrators in charge, leaving regular people with no choice but to accept secretive, one-sided proceedings for their claims,” said Patrice Simms, Vice President of Litigation and head of the Access to Justice program at Earthjustice.” Earthjustice applauds Chairman Nadler, his colleagues, and all of the advocates fighting against this unfair and unethical practice for their efforts to craft the FAIR Act, and we are proud to support the legislation.”

“Imagine if the Supreme Court ruled that corporations could escape lawsuits aiming to enforce consumer protection, worker rights and anti-discrimination laws simply by uttering a secret code. Outrageously, exactly that has happened, except it is not a secret. Corporations of all sorts insert forced arbitration provisions in worker and consumer contracts, and effectively wipe away people’s protection against financial rip-offs, wage theft, online swindles, harassment and discrimination and more,” said Robert Weissman, president of Public Citizen. “The good news is that the public has caught on to this racket and is demanding action. The FAIR Act, introduced by Rep. Hank Johnson and Sen. Richard Blumenthal, provides exactly what the public is demanding: an end to the forced arbitration fraud that systematically strips Americans of their legal rights and access to justice.”

“Forced arbitration is a rigged secret proceeding that denies the cheated and ripped off the right to seek remedies before a judge and jury, and allows corporations to hide their misconduct from the public,” said Christine Hines, legislative director at National Association of Consumer Advocates. “The FAIR Act and other bills introduced today will help to level the playing field for consumers and workers by ending forced arbitration in the corporate fine print and restoring our choice to seek to hold wrongdoers accountable in open court.”

“I am proud to have spearheaded the Ending Arbitration Act of Sexual Harassment. Forced arbitration clauses in employment agreements are not designed to achieve fair, expeditious or cost-effective resolutions for sexual harassment cases. They are often used by companies to demean and silence women and conceal pervasive sexual harassment while allowing sexual predators to operate with virtual impunity,” said Gretchen Carlson. “I believe every woman and man should be entitled to have their claims adjudicated in a courtroom rather than behind closed doors where victims can never discuss what happened. I’m thankful for this bi-partisan effort to make workplaces safer for ALL across our country.”

“Alliance for Justice applauds the FAIR Act and this very important step to address a serious injustice that affects millions of Americans,” said Nan Aron, President of Alliance for Justice. “Forced arbitration is an abusive practice that denies workers and consumers their right to a fair day in court. Instead, it corrals them into an unjust process controlled by the very party that harmed them, whether it be an employer, a lender, a nursing home, a service provider or some other entity. It’s time for forced arbitration to end.”

Renowned Boston attorney Mitchell Garabedian is suing the Buffalo Diocese for $300 million on behalf of a Niagara County woman who said she was abused by a Franciscan priest in the 1970s and 1980s. The attorney was made famous by the Academy Award-winning movie “Spotlight”, has filed a lawsuit in state court against the Buffalo Diocese, the Conventual Franciscan religious order and Cardinal O’Hara High School.

Read the source article at KAKE.com

Gwyneth Paltrow is countersuing a man who accused the actress of a “hit and run” ski crash on the Utah slopes in 2016, saying he’s trying to exploit her fame and wealth. Terry Sanderson, a retired optometrist, sued Paltrow last month for $3.1 million, claiming the Oscar winner plowed into him from behind and knocked him unconscious at the Deer Valley Resort in Park City, Utah.

Sanderson, 72, alleges Paltrow was “skiing out of control” and describes the collision as a “hit and run,” according to The Associated Press . Paltrow, in a countersuit filed Wednesday, contends she’s the real victim. She blames Sanderson for the crash and says he’s now trying to take advantage of her celebrity.

Read the source article at HuffPost

Gwyneth Paltrow has filed a countersuit against a man named Terry Sanderson, a combative move in a legal battle that began in January. Sanderson claimed in his suit that he had been the victim of “a hit-and-run ski crash.” Paltrow filed her countersuit on Feb. 20 and is seeking a jury trial and a symbolic $1 in damages, along with attorney’s fees. She says that Sanderson’s suit is a “meritless claim” and “an attempt to exploit her celebrity and wealth.”

Read the source article at YourTango

In February 2017, Sanford Wadler, a former in-house lawyer at Bio-Rad, secured a record $11M verdict in his whistleblower retaliation lawsuit. Despite his stellar performance record as an in-house lawyer at Bio-Rad for 25 years, they fired him after he raised concerns about Bio-Rad employees in China violating the FCPA’s bribery and books-and-records provisions. Bio-Rad appealed the verdict, and in a ruling . Wadler retained most of the verdict, including $5 million in punitive damages and $2.96 million in compensatory damages for past economic loss. After the trial, Bio-Rad stipulated to pay $3.5 million in attorneys’ fees and costs. Wadler’s win highlights the substantial exposure that companies can face for whistleblower retaliation.

In the latest trial over an alleged link between baby powder and certain cancers, Johnson & Johnson says a law firm that previously won a $4.7 billion verdict against it is attempting to win over the jury by playing the proverbial “race card.”

The ACLU Foundation of Southern California sent a demand letter Tuesday to Coachella Valley Music and Arts Festival organizers on behalf of two transgender siblings who were refused access to restrooms that corresponded to their gender identities at last year’s festival headlined by Beyonce at the Empire Polo Club in Indio.

Three former delivery drivers for a pizza chain filed a putative class action earlier this month claiming they were so poorly paid for using their vehicles for deliveries that they ended up making less than minimum wage.

A new report by the public-interest advocacy group U.S. PIRG reveals that tests of five wines and 15 beers, including organic ones, found traces of the controversial weed killer glyphosate in 19 out of the 20. They include brands like Coors Light, Miller Lite, Budweiser, Corona, Heineken, Guinness, Stella Artois and Samuel Adams. “The levels of glyphosate we found are not necessarily dangerous, but are still concerning given the potential health risks,” U.S. PIRG said.

President Trump is asking his legal team to stay on beyond the end of the Mueller investigation, according to The Daily Beast. That’s because the Southern District of New York isn’t limited in the scope of what it can investigate. Above the Law editor Elie Mystal tells MSNBC’s Ari Melber “there is significant jeopardy up and down the Trump Organization” as to what the SDNY may look into.